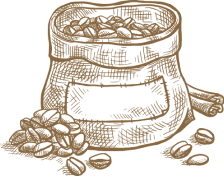 We all love a quick coffee and a gossip, I mean who doesn’t? But did you know that the coffee houses of the seventeen hundreds were a hotbed of modern thinking? These social settings were emancipated spaces where controversial and taboo subjects could be openly debated safely.

For thousands of years safe water supply was not a given, beer and fermented beverages were the norm. Large populations of workers carried out their daily tasks slightly or very drunk! Even though the coffee at the time was crudely prepared and it’s taste was likened to gruel, this caffeinated hot drink boosted and fuelled the industrial revolution as a new wave of energy and sobriety drove scientific discovery. Interestingly you were not allowed to be seated until you gave up some gossip or exciting news from the outside world.

Next time you sit down and enjoy a freshly brewed americano be thankful that whilst we still love a good gossip that coffee roasting and preparation has come on leaps and bounds since those early days!